I had time before the Berlin conference to go to Berlin’s Jewish Museum: not, as I had idly thought, the Holocaust Museum, but a museum covering the whole history of Jews in Germany, and not allowing the mid-20th-century to dominate the rest of the long story. It manages to make the story as a whole appear vibrant and hopeful as well as horrifying. (My personal surprise: if I read the numbers right, of 560,000 German Jews in 1933, 200,000 apparently died in the Holocaust. Which obviously is very bad: but I had not imagined that more than half of Germany’s Jews survived. If those numbers are correct, I suppose this is because within Germany itself, the Nazis tightened the screws relatively slowly through the 1930s, and plenty of Jews were able to get out. Presumably, then, German Jews had much better overall odds of surviving than did Polish Jews.)


Still, there was also stuff on the long history of antisemitism in Germany, whose centrality to German culture I hadn’t appreciated. (Of course, since the Jews were simply expelled from medieval England, it didn’t happen here. The English had to make do with victimising and massacring the Irish instead.)


And then, the next day, the conference went on an expedition to the stunning medieval churches of Wilsnack and Havelberg, which are a long way off the beaten track and I would recommend to anyone. Any what do we find all over them? Well, there’s this: 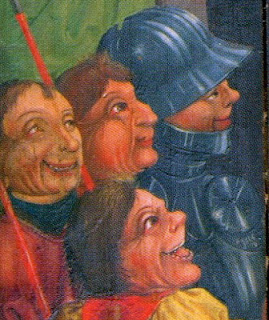 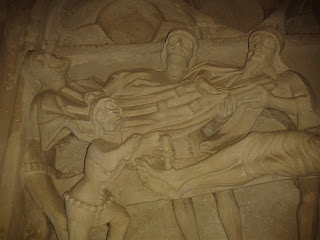 All of which, needless to say, are pretty nasty anti-Semitic caricatures.
And then we keep meeting Jewish material during the conference. The Jews’ role in Protestant eschatology, the Jews as a template for the Christian nation. And for Lutherans especially, the Jews and their law as a vital straw man. You can’t have justification by grace through faith unless you’ve got some Jews to show you just how wrong justification by works of law is.


So I come away reminded that Christian anti-Semitism isn’t just some nasty quirk easily isolated. (Duh.) It’s systemic; Christianity’s original sin. Or one of them, anyway.