I spent much of yesterday at Auckland Castle, as part of the advisory panel to the massive redevelopment planned there, which will eventually include big exhibitions on the history of the Church in the region, and also on the history of religion in Britain from the earliest days to the present. All very exciting, and some of the fun tech-y possibilities for the use of smartphone apps in the museum context which Dee Dyas from York's Centre for Christianity and Culture was showing us were really impressive.

But the star of the day was obviously the building itself. I'd been there before, chiefly to photograph this item for my forthcoming book:

It's a memorial painting for Bishop James Pilkington, the first Protestant ﻿bishop of Durham and arguably the most Puritan bishop ever in the Church of England; and it's also the most realistic contemporary image of a Protestant family at prayer which I know of.
But there's lots more there, naturally, and we got shown to all the nooks and crannies normally hidden - including whole sections desperately in need of some love, attention and money. Highlights included the memorial in the chapel to Bishop Richard Trevor (1752-71), known cruelly in his own time as 'The Beauty of Holiness' - and while the sculptor clearly tried to improve on the original, you can still see why: 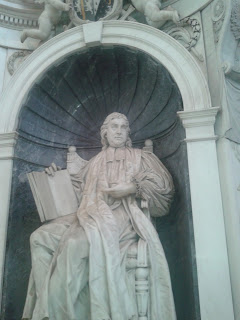 Rather more specially, this lectern-box which, like so much else, dates from Bishop Cosin's time, in the 1660s. It's in the bishops' private chapel which isn't normally open to the public: 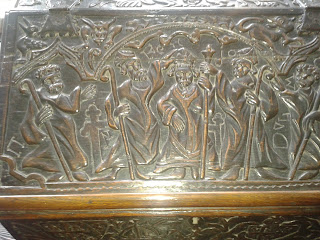 More of this kind of stuff will eventually come out into the light of day as the Castle is progressively opened up over the next five or more years. The hope is not only that it'll be a superb exhibition; but also that it'll bring an economic boost to Bishop Auckland, which has yet to be seriously touched by the economic regeneration that some other parts of the North-East have seen.