'Worship and the Parish Church'

... This is Natalie Mears' and my new edited volume, just out. In a very smart burgundy cover. 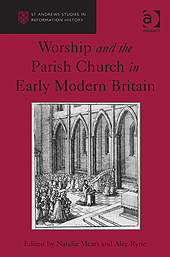 It is very much a Durham product, as it's turned out: not just edited by two Durham folks, but also including contributions from one former Durham person (Jonathan Willis, now in Birmingham) and one newly arrived one (Hannah Cleugh, just arrived as chaplain at University College). 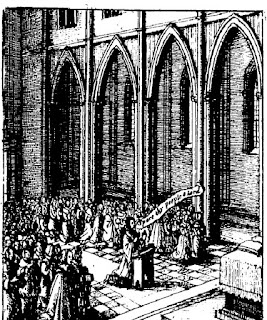 Natalie and I spent an age searching for a cover picture for this book. There are hundreds of images of preaching in post-Reformation England, but we wanted a picture of the ordinary Prayer Book service being said. And we simply couldn't find one. This image - from Anthony Sparrow's Rationale upon the Book of Common Prayer - was the earliest we could locate. And it dates from 1655, a year when (under Cromwell's Protectorate) Prayer Book worship was, technically, illegal (though the law was widely flouted).

In other words, the form of worship which was legally mandated in England for eighty-five years (1559-1644), and which consumed hours of any conscientious clergyman's life every week, drew so little real attention that no-one bothered to draw an image of it. In the same way, as Pat Collinson observed, manuals for clergy paid literally no attention at all to their responsiblity to lead the Prayer Book service.

So ordinary worship is, in effect, a black hole in our knowledge of Reformation England. The book, we hope, does something to fill it.
Posted by Alec Ryrie at 03:07