A piece of unalloyed good news: this former doctoral student of mine has landed a permanent academic job, at Lille University.

Aude's PhD was a really outstanding piece of work on the liturgy in Henry VIII's England. Everyone has known for a long time that Henry VIII got his clergy to scratch the Pope's name out of the service books. What Aude did, which no-one else has done before, is actually go through all (well, almost all) of the surviving service books to see exactly how they were defaced. What she might have found was evidence of a consistent policy. What she did find was much more interesting: the lack of any consistent policy, with local bishops, magistrates and individual priests working out how best to interpret the vague instructions coming from the centre.

So one result is that she can track the changing perceptions of Henry's perennially unclear religious policies in the books. Take this one, for example, which she found in a missal used in Salisbury diocese: 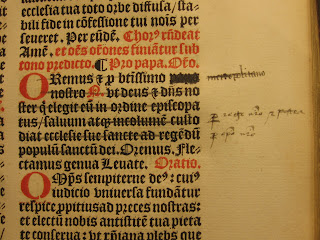 Here the word 'pope' in a prayer for him has been blot﻿ted out completely, with the word 'metropolitan' inserted instead: this priest thought he might pray for the Archbishop of Canterbury in place of the Pope, as indeed the king briefly considered in the spring of 1533. But the king, and then this priest, quickly thought better of it, lining through the whole prayer to replace it with a simpler prayer for the king.
More excitingly (for me at least), Aude's work has shed light on official policy itself, and drawn our attention to liturgy as a means by which that policy is expressed. The fact that Henry's regime never settled on an official text for the liturgy, nor indeed (as she points out) ever formally defined the doctrine of Royal Supremacy over the Church which it insisted on so ferociously, points to a deep instability at the heart of Henry VIII's government, and indeed probably also at the heart of Henry VIII.
It's a terrific piece of work which will, I think, change the way we understand the period. The book should be out before too very long, I hope. In the meantime, it's very satisfying when talent is recognised on the job market.