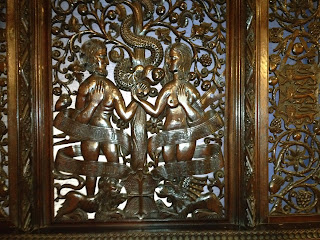 Adam and Eve for a marriage-bed might seem obvious enough, if not subtle. It's been suggested that Adam and Eve's faces are carved to resemble the royal couple, which is possible if not exactly conclusive. But the best bit is the text on the cartouche: 'The sting of death is sinne / The strength of sinne is the law' (I Cor 15:56). Romantic, eh?
Posted by Alec Ryrie at 13:10