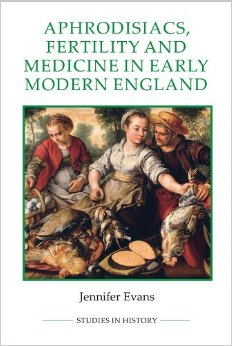 If you really want to read a blog post about this book, you're probably better off reading one of hers, but my own stake in this was that I was the advisory editor for the RHS Studies in History series who worked with her on the book, and so I feel a certain avuncular pride in it.

With a title like that, it'll certainly sell (wait till you see the pictures). But the book has a deadly serious historical point. Modern scholars have been almost unable to write on early modern aphrodisiacs without being consumed by titillation (cheered on by publishers, naturally). At best, we think of them as part of what Faramerz Dabhoiwala calls the first sexual revolution. Jennifer's argument is that this fundamentally misses the point. Artificial stimulants to sexual desire were, in the early modern period, not solely or even primarily a means to debauchery or sensory gratification. They were a means to fertility, a human function whose connection to sex we are sometimes liable to forget. Infertility and subfertility were at least as sharply painful in the early modern period as they are today, and much harder to treat. But, unusually sensibly by early modern medical standards, the truism was that stimulating sexual desire would assist conception. Unlike plenty of other contemporary medical theories, this was, as far as it went, harmless. And perhaps a little better.

Jennifer's book carefully traces the uses of aphrodisiacs to treat fertility problems across the period, which is a useful corrective in itself, but I think also raises some more profound issues about the acculturation of sexual desire. It seems pretty clear to me from some of her sources that, in this period, fertility was itself desirable, and fertile sex was sexy sex. The modern world, which has for excellent reasons concluded that fertility and sexual fulfilment are almost in opposition to one another, is in a very different place.

In other words, this book manages the trick every good historian aims at: to make the past seem both familiar, intimately familiar in this case, and also very alien indeed. I recommend it.
Posted by Alec Ryrie at 05:15