It's not often that the English Reformation manages a bona fide news story, and admittedly this one isn't a front-page lead, but it's exciting enough in its own way.


A manuscript has surfaced, from an as yet undisclosed source, of an English translation of Erasmus' devotional manual the Enchiridion militis christiani ('Handbook of a Christian Soldier'). The book's significant enough in its own right: this was probably the most influential devotional text of the early sixteenth century, a bestseller amongst Protestants and Catholics alike.


What makes it more tantalising, as the publicity around the export ban claims, is that we know that the Biblical translator William Tyndale made an English translation of the Enchiridion early in his career, in the early 1520s. But no authenticated copy of that translation has ever been found.


The only previously known English translation of the Enchiridion was published in 1533 and 1534 (slightly variant versions). The translator is anonymous. So it has long been tempting to put two and two together and guess that this was Tyndale's work (no English printer would have dared put that name on a book at that date). But there's very little evidence to support it. Anne O'Donnell's scrupulously careful edition of the 1533-4 text for the Early English Text Society, published in 1981, marshalls an impressive array of circumstancial evidence to test whether there was any link, and - despite clearly hoping that she'd find one - didn't come up with much. In particular, there is not much common ground between the translations of Biblical material in the 1533/34 Enchiridions and in Tyndale's own Biblical translations. (His Biblical work was done after the putative Enchiridion translation, so that's not a decisive argument, but it's indicative.) So since then, the Tyndale Enchiridion has seemed like a dead end.


This new manuscript doesn't solve the mystery by any means. But it certainly reopens it. The full text hasn't been published yet, just the first page: 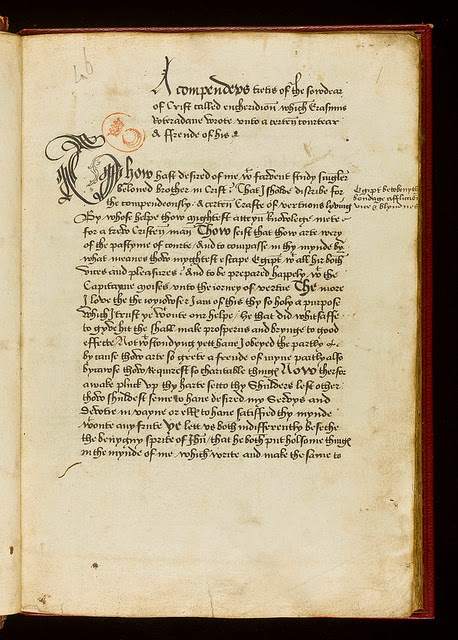 Now when we compare that to the same section of the 1533 translation, we can see it's almost but not quite identical. Far too similar to be a coincidence, but the differences aren't simple copying errors. The insertion of 'of' in the first line might be, but in lines 4-5, for example, where this text has 'thow myghtest atteyn knowlege mete for a trew Cristen man', the 1533-4 text has 'thou myghtest attayne a vertuous mynde, accordyng to a true chrysten man'.


So what's going on? Well, hard to say until we've got the whole text published, and until the codicologists have had a proper stab at dating the thing. But it would be perfectly plausible for this to be an earlier version of the text later revised and printed in 1533/4. And since Tyndale remains the only known early translator of the Enchiridion ... well, on the face of it there is certainly something going on here, some new wrinkle in the textual history of the English translation, and it is entirely possible that Tyndale is somewhere in the mix.


If anyone has £242,500 burning a hole in their pockets and would like to buy it, that would be nice.


UPDATE: I'm told by Andrew Hope, who's examined the actual MS, that it's dated to 1523. And he reminds me that the source which describes Tyndale's production of the translation - in, pretty much, that year - also tells us that multiple fair copies were produced, in an attempt to seek patronage. (He also tells me the MS came from the duke of Northumberland's library, but since we don't know how it got there that doesn't help very much with provenance.) It starts to look genuinely plausible that this is the real thing.
Posted by Alec Ryrie at 05:35