One of the problems I've been wrestling with in writing my current chapter is the disappearance of a vocally Christian Left in American politics since the 1970s, which I think is symptomatic of a whole series of wider issues. In the process, I came across this poster, from the great moment of the American evangelical left, the Carter campaign of 1976, when Jimmy Carter won the presidency off the back of the evangelical vote. 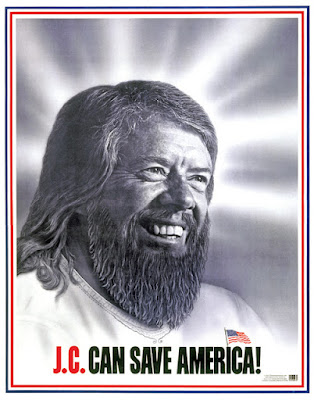 A little ironic in retrospect, I give you. But: that is actually funny, isn't it? And deliberately, slightly self-parodically funny. The Obama campaign in 2008 could have used a little of that kind of humour. So my question: where did the funny go in American politics? The religious Right isn't given to self-mockery, though the broader Right is certainly capable of top-notch satire. And the Left tends towards earnest and rather dreary righteousness.

I am afraid that my hunch is that, although I really like that poster, it is a sign that things were already going wrong for this constituency. It is the sort of thing produced by people who not only know that they can look a little bit ridiculous but, crucially, who even look a little bit ridiculous to themselves. It's clever, sharp and nuanced, but that's not the kind of thing that ever got anyone up on a barricade.
Posted by Alec Ryrie at 05:59