So, I have a new theory as to who is ultimately to blame for the UK's current nervous breakdown. And he wears a baseball cap. (Well, he did once. Poor bloke, this is unfair.) 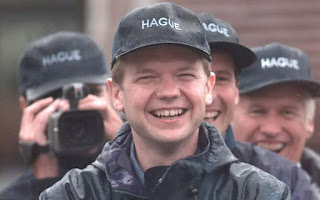 Here's the rationale. What makes the current moment so intractable is that we've bolted bits of direct democracy onto a representative system, with no clear rules for how the two work together. It is perhaps not a coincidence that the prime minister responsible for managing this cyborg is so often described as robotic. The referendum is the most obvious problem: a narrow but decisive vote for an extremely unclear outcome, which in law was merely 'advisory' but as a political fact has become a kind of constitutional law, impossible to overturn except, maybe, by the same means. In the meantime, Parliament has the tricky task of discerning its meaning without actually challenging it, like the priests at Delphi. We've been using referenda with increasing frequency over the past few decades, without ever really thinking about how they work, so it was probably inevitable that one would turn around and bite us sooner or later. I suspect we'll be more careful in future.

But the referendum is only one part of the problem. Another part of the constitutional doomsday machine we've built for ourselves is that both of the main political parties (plus the little ones too, like my own Lib Dems, but who cares) now have leaders chosen by the mass membership of the parties, not by the MPs. Like a referendum, this sounds obviously 'democratic', though party membership is a pretty odd demos. But in a parliamentary system the consequences are bizarre. Parliament is supposed to be sovereign: and yet MPs can have a leader whom most of them see as unfit imposed on them by their parties. Labour - which has long had an element of mass-membership choice in leadership elections, but which has now moved to do so exclusively - finds itself completely unable to resolve this clash.

The Tories' situation isn't much better. Their MPs can at least defenestrate a leader, but they currently don't dare do so for fear of the candidate the membership might impose on them. Since Hague introduced the current system in 1997, having been embarrassed be being elected by MPs alone, the Tories have had four new leaders: twice the MPs have in effect conspired to deny the members a choice by leaving only one candidate standing, and on one of the other two occasions the membership's choice was disastrous. I humbly suggest that this system does not work very well.

The natural next step in this de-parliamentarisation of our political parties is for some of them (the Lib Dems might do it) to consider having a leader who isn't an MP at all. That takes us into the territory of Poland's Law and Justice, where parliamentarians are in effect dictated to by an outside figure who never has to face a mass electorate. That would be bad.

So, if only William Hague had stood firm and defended his fellow MPs' rights in 1997, everything would now be all right ...

The best argument ever made for Brexit was parliamentary sovereignty (yes, yes, irony, I know). If MPs can be trusted to make laws, they ought to be trusted to choose their own leaders. By all means give party memberships a more active role in selecting or deselecting individual MPs. But once they're there, they have to be able to organise themselves as they see fit, or we will wind up with our cyborg constitution being managed by zombie parties.