Reading about 20th-century American Protestantism, I come across an excellent and disturbing book about the Ku Klux Klan in the 1920s, which emphasises the organisation's commitment to Protestantism as a core value.


I had always thought of the Klan as kind of conservative and reactionary. Apparently I had underestimated their ambition. They seem to have thought of themselves as optimistic, forward-looking and even in a sense progressive, allied as they were with the great progressive cause of the day (Prohibition) and opposed as they were to retrogressive forces such as Catholicism (priestcraft and intolerance) and to racially inferior groups (Jews and African-Americans) who would drag America backwards. They were also keen on intra-Protestant ecumenism. Onwards, to a paradise of united Protestant racial purity!


And they thought they were winning. This macabre image doesn't just show a Klansman sitting on the dead body of American Catholicism, which he has defeated. He is, incongruously, visibly happy and optimistic about it. Who knew you could get a smile out of one of those hoods? 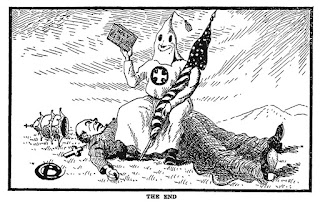 But apparently I have been misreading the hoods themselves. In the original, 1860s Klan the white robes were said to symbolise the vengeful ghosts of the Confederate war dead. In the new, cheerful, forward-looking Klan of the Twenties, a brighter and more edifying alternative was preferred. These were, the Klan now declared, the white robes of the righteous, as in the book of Revelation, symbolising purity of conscience as well as, they hardly needed to add, skin colour. And we were told that the hoods were not in fact to conceal murderous cowards, but so that humble Christians might not be seen to take the credit for the Klan's godly works, but instead anonymously give the glory to God. As the Exalted Cyclops of Texas (I am not kidding) wrote in 1923:

Who can look upon a multitude of white robed Klansmen without thinking of the equality and unselfishness of that throng of white robed saints in the Glory Land?

Who indeed. How could anyone possibly think of anything else?