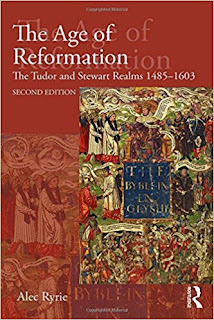 ... And that’s it. I am still not entirely sure it’s a good idea: perhaps rather than dressing mutton as lamb, it would be better to let it age gracefully. My honest advice to anyone looking to buy a survey of the English Reformation is to go for Peter Marshall's about-to-be-published Heretics and Believers, which is a really heavyweight and compelling narrative. Still, I’d be interested to know if anyone has thought seriously about the second-edition phenomenon. And while you mull that, please rush out and buy a copy, or they’ll never commission a third edition.
Posted by Alec Ryrie at 01:16