So, at our History of Christianity seminar this week we had a fascinating paper from Mark Hutchinson on how Protestant theology influenced political concepts of liberty across England and Ireland in the sixteenth and seventeenth century, which was too subtle and sharp for me to summarise here. But he also brought this with him, which was too good to miss: 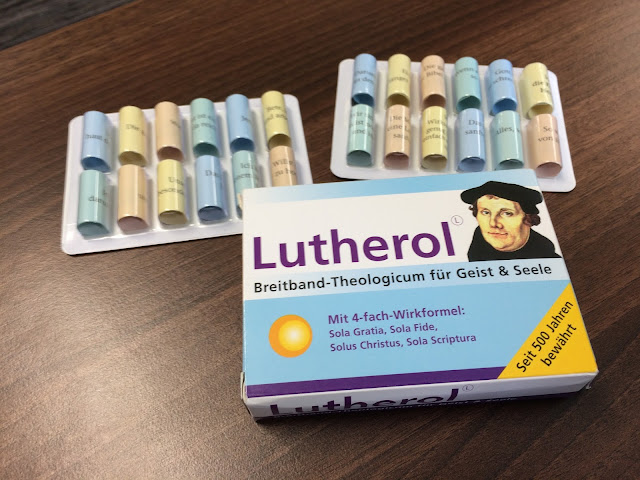 There has been lots of good tat produced around the Luther quincentenary (the Playmobil figure seems ubiquitous) but this is the best I've seen. In case it's not clear on the image, the 'medicine' is a series of little scrolls with apposite Luther quotes on them. The accompanying leaflet keeps the metaphor going: I particularly liked the note that the active ingredients were 90% Lutheran and 10% Reformed.

But it did leave me wondering what sort of medicine different theologies were. The title Lutherol suggests a painkiller, and I'm not sure that's right. A painkiller would work better for Catholicism, I think. Lutheranism seems to me more like a kind of decongestant, like one of those sprays that takes instant effect. Calvinism, by contrast, is more of a purgative. Certain other Protestant groups are perhaps more psychoactive. Anglicanism is undoubtedly a depressant. Or, sometimes, a placebo. Other suggestions on a postcard please.