I read this screed against laptop use in classes with initial scepticism and then increasing belief. It goes against my generally nonconfrontational approach to life but I think I might give it a go.
Posted by Alec Ryrie at 02:01 No comments:

Fresh from a summer holiday, my rare annual chance to read the odd novel, and to this year's discovery: Maria McCann's The Wilding, set in 1670s Dorset, in which a young man who believes himself to be an upstanding citizen progressively uncovers a whole regiment of skeletons in the family closet and realises that he is simply sheltered and naïve rather than virtuous.


It isn't the perfect novel. I did find that the ending fizzled a little. But it's a gripping read. McCann writes both beautifully and compellingly, which is not an easy double. The characters are appealing, particularly the young hero - who, by the end, is considerably more heroic than he himself recognises - and his parents, who you can't help but love as much as he does. It does the historical-novel thing unusually well: it captures lots of atmosphere and subtle detail, and much of the plot turns on one crucial incident from the Civil War, but most of it is as timeless as most human lives are. There are no attempts to dress a history lesson up as fiction, and no walk-on parts from big-name characters. And I challenge you to read it without thinking that you'd rather like a mug of cider.


Still, my point is not simply to plug it but to pick out a more unusual virtue. I think McCann manages to get her hero's religion right. He's not a particularly pious young man, but his character is underpinned by the assumed religious framework that pervades his life, from which he draws considerable strength, and which - briefly, at one pivotal moment - he openly questions. She doesn't draw attention to it very often. It simply seems normal, and it adds to his humanity.


Is it just me, or is successfully pulling this off in a historical novel really rare? I have read a series of historical novels recently, all of which I have enjoyed, all of which fall down on this point. Geraldine Brooks' Year of Wonders, another rollicking post-Civil-War read, ends with the heroine sloughing off her religion. Jill Paton Walsh's Knowledge of Angels, a much better book, is about the struggle and inevitable failure of a cleric to hold onto his faith when confronted with an alternative. Even the incomparable Wolf Hall and Bring Up the Bodies present Thomas Cromwell's religion as a species of modern secular scepticism.


I was beginning to wonder if the novel, as a genre, is capable of dealing effectively with characters who genuinely hold to and draw strength from their religion. Or is there a cult of individualism so deeply ingrained in it as a form that we can only construe adherence to truths beyond the self as a form of oppression? I struggle to think of many modern novels whose characters' religion is simply part of them (aside from those like Susan Howatch's Starbridge series, where that is the point). So McCann is a breath of fresh air. I've ordered her first novel, and may even get to read it before next summer.
Posted by Alec Ryrie at 01:50 No comments:

Ex-Durham theology students go on to do all kinds of wonderful things, but I've recently come across one of the more wonderful ones. Rich Wyld, formerly a doctoral student here, now a C of E parish priest in Dorset, runs a delightful blog called Theologygrams, which mixes some serious and perceptive points with ladlefuls of straight-faced silliness. And he now has a book out, which if you have the faintest taste for Biblically, theologically or mathematically based humour (any one of the three) will make you laugh out loud. Buy a job lot now in time for Christmas.

This one (below) isn't in the book but will give you a flavour! 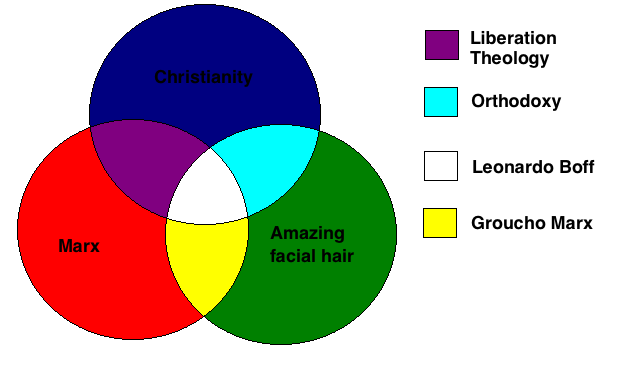