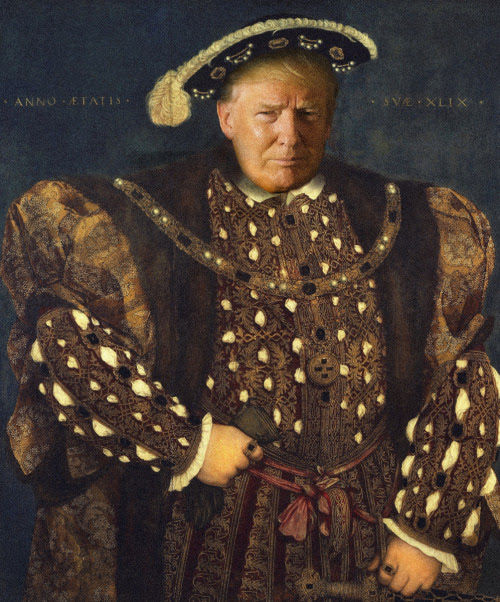 So, we have a politician whose characteristics appear to include narcissistic self-importance, a certain bearish charisma, intellectual laziness and a butterfly mind, a throwaway attitude towards women, a degree of real shrewdness which he himself persistently overestimates, and a lack of any sustained interest in the nitty-gritty of government. I am talking, of course, about King Henry VIII.

Let’s imagine that Henry VIII fell through a time portal and was elected President of the United States. How would he, and his new subjects, manage?

Well, the good news first. Henry VIII had one undoubted and enviable political skill: he could recognise in others the administrative talents that he himself lacked. If President Henry could quickly identify a Thomas Wolsey or a Thomas Cromwell, he would quickly delegate most of the business of government to that person and the political machine that he (it would definitely be a he) would build up. Most of the time he would leave his brilliant operative alone and take his advice. Stuff would get done and Henry would take the credit.

He would generally temper his wilder ambitions with some realism about what is actually achievable. He would not want to be seen to lose, and so would not take wild risks. He might chafe for military glory, but he wouldn’t embark on something entirely recklessly.

He would stretch the law rather than break it. He would use, circumvent and manipulate the structures available to him, and would bully and overawe opponents rather than, say, hiring assassins. He would want to know in his own mind that what he was doing was legal and right, although he has a remarkable ability to persuade himself that what he wants is indeed justified. But he would be entirely willing to trample norms and conventions when in pursuit of something he really wants, and he would reward those ruthless and cunning enough to find him ways of doing so.

He might, for example, order his military to commit atrocities, although, as he discovered when he gave such an order to a force invading Scotland in 1544, his commanders on the ground might refuse actually to carry them out.

He would be intermittently paranoid. As a result, he would use, and bend, the law vindictively and indeed irrationally to pursue those whom he took against. He would do so pretty implacably. His defeated former presidential opponent, for example, might be well advised not to plan a quiet retirement.

He would find his inability to bend foreign governments to his will infuriating, and would be ready to see - for example - their willingness to protect his critics as a deliberate provocation. Personal snubs, such as failing to turn up to a summit meeting with him, would not be taken well.

Most importantly, perhaps, for those working out how to survive a Tudor administration: he would be an odd mixture of stubbornness and malleability. You can’t tell him he’s wrong, and open opposition only makes him dig in. But if you can sidle up to him and work on him askance, you can often get him to change his mind or shift his priorities. He will never admit that he has changed his mind, and it would be foolish to try to get him to do so, but in fact he is remarkably open to persuasion and indeed manipulation. Just make him think that the idea you have planted in his head is in fact his own idea, and you are there.

A word of caution, though. That malleability does mean he can change his mind for no apparent reason, including turning vengefully on those who were once his trusted intimates. Especially if he starts to feel that he is being pushed around. As Wolsey said: ‘be well advised and assured what matter you put into his head, for you shall never pull it out again.’

Good luck, and hold on tight.

Reasons to be cheerful, part 99

Post the US election: another instalment of what appears to be becoming a regular service. Since my immediate instinct is to regard this as, without exaggeration, the most frightening public event of my entire life, I am having to dig deep. Still, if you want a dose of optimism, here's the best I can currently do.

1. It won't be as bad as we fear - and I can prove it. Those of us in the liberal elite have proved, over the past two or more years, that we are entirely unable to predict any political processes of any kind. And this one could scarcely turn out worse than we fear. Ergo, it will be better. QED.

2. I am, just about, old enough to remember the last time there was this much fear after a US presidential election: 1980, when there was a widely held view that the Americans had elected a crazy warmonger who was going to kill us all. I am not trying to defend every aspect of Ronald Reagan's policies, which were at times both callous and reckless, but it is fair to say that he turned out better than we feared. Yes, I know he had vastly more political experience, and policy coherence, than Mr Trump. I'm doing my best here.

3. It was a clean result. No hanging chads, no birtherism: no-one is going to be contesting the legitimacy of the outcome as such. There's a little piece of the civilised world's fabric that won't be further damaged.

4. America still hates dynasties and turn-takers. Not since 1988 have the voters chosen the presidential candidate who thought it was their time. Remember a year ago when the smart money said we'd be looking at a Bush v. Clinton re-run? It's now up to the Democrats to produce some real presidential candidates for next time.

5. Demography isn't destiny. To be clear: I am, ahem, discouraged that a candidate who was so blatantly indulgent towards white supremacists and who seemed to embody racist assumptions so effortlessly could have won. (Although this is hardly a first in American history.) But I am not a great deal more encouraged by the Democratic campaign which seemed to focus on mobilising identity groups rather than offering a vision for the country. You can't just build up blocks of voters and take them for granted on the basis that your opponent is repulsive. From what I am hearing, Trump won a larger share of Hispanic voters than Romney did. If that's true, I am kind of mystified but also kind of cheered by it. Democrats can't simply, as they sometimes seem inclined to, wait for the old white folks to die and the Hispanics to have kids, and let the victories roll in.

6. After eight years of opposition and obstructionism from Republicans, it will be good for them, at least, to have to try to work out how to govern again. Either they will complete the self-destruct process as a party that they've been engaged on, in which case the mid-terms in 2018 will have consequences for them. Or they will find a way of making it work, in which case the US will have second functioning political party back.

7. Syriza. Brexit. The SNP. Podesta (the Spanish political party, not the Clinton staffer). M5S in Italy. Bernie. Corbyn. Thaksin Shinawatra, if you want to push it. Now Trump. ... At the risk of jumping to conclusions, could it be that voters are trying to tell us something? Yes, I know that the question is what. But surely now, at last, it is impossible to continue believing that merely defending a late 20th century politico-economic status quo is good enough?

Of course, if you happen to come up with anything which is better and which will actually work, do let the rest of us know.
Posted by Alec Ryrie at 05:20 1 comment: